In 1987, the first X68000 appeared with the theme of Gradius. In Japan, NEC PC-9801 was dominant and all other makers made 80×86 and MS-DOS machines. It was such a time when the term “personal” in personal computers was reduced to mean each company's operator.

When it was announced that Sharp would make 16bit version of the X1, they said “It will be an 86 machine at any rate”, “PC-9801 is enough for 16bit machine”. Personal users were very disappointed about these words. But when X68000 came out, it changed the former meaning of personal computer for these users. It had vertical slim design, 68000 CPU that personal users demanded, linear memory space with 1MB memory as default and up to 12MB max, graphics with 65536 colors, 768×512 bitmap text screen, sprites, FM sound generators, ADPCM, 5 inch FDD with auto eject mechanism, 3D scope, screen capture, track ball & mouse, HDD interface, and so on. Such specs were unexpected, the price was slightly under 400,000 JPY and left speechless.

It was only natural that the word “personal workstation” appeared by the idea that “personal computer” has potential with which we can try something, express ideas and images in realtime. It was different from the so called “Pa-so-Co-nn” that aimed only at word processing, spread sheets, so when we needed something more besides business use, we were required to buy optional hardware.

Personal workstation, platform that responds to personal ideas and inspirations and expresses, realizes and connects to much more ideas. Even after 5 years from its debut this book is a good guide for people who want to efficiently use the inside of X68000. 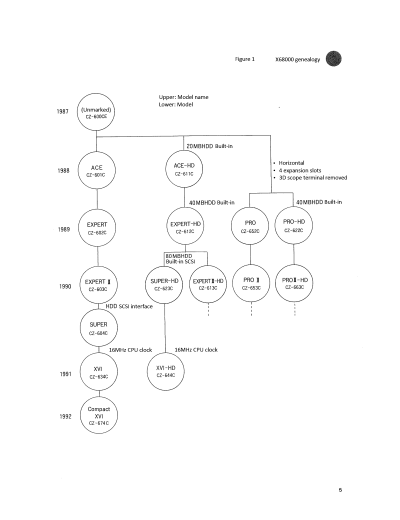