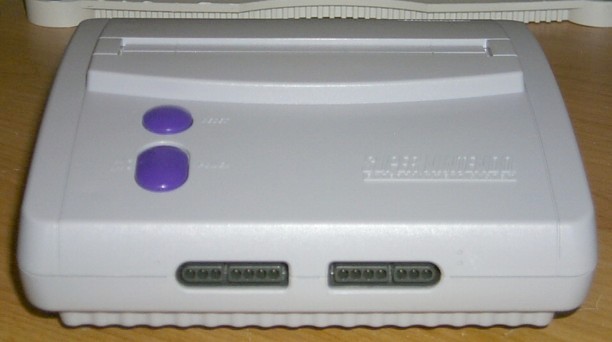 The SNES2 didn't include RGB or S-video output, for reasons known only to Nintendo. Luckily it's really easy to get both types of output from this system.

This mod is fairly easy, although it requires a bit of planning and a steady hand. For RGB, you will need to attach three wires to pins 20, 22 and 24 (R, G and B, respectively) of chip U7, which is the video encoder. The chip is clearly marked and located just behind the cartridge slot of the SNES. There is no composite sync output from the newstyle SNES, so you will need to run a line from pin 7 of the video encoder to pin 3 of the SNES AV out (thanks to Raymond Day for that little tidbit). If your RGB cable uses composite video for sync you can omit this step, although using composite sync eliminates “crosshatching” artifacting caused by using composite video as sync.

The Procedure for RGB 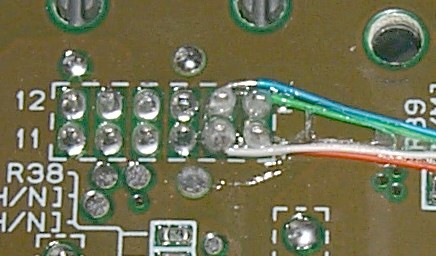 Shown in the top picture is the video encoder. First, remove the heat sink on the 7805 then attach the four wires. Run them under where the heat sink would be, and then tuck them through a hole in the motherboard allowing them to reach the bottom of the board. You should attach the Red, Green, and Blue wires to pins 20, 22, and 24 (as well as another wire for composite sync to pin 7) of this chip.

The RGB signals are very strong. It is highly recommended that you run each video signal through a resistor to tone them down depending on your monitor or personal taste (somewhere between 75 to 125 ohms). 75 ohm resistors seem to be the 'definitive' value judging by the last two revisions of the original model SNES that also used the same 'S-RGB A' video encoder used in the SNES mini (motherboard codes of these revisions are: SNS-CPU-RGB-01, SNS-CPU-RGB-02 and SNS-CPU-1CHIP-01). So use one 75 ohm resistor in series on each line - Red, Green and Blue. If you find that the image is still bright, you may substitute the 75 ohm resistors for 100 ohm resistors. It is recommended to use heat shrink to cover up the resistors, so that the exposed leads don't touch the motherboard.

It is also recommended that you use a normal NTSC SNES/Super Famicom RGB cable, i.e. one with 220 uF capacitors inside on the Red, Green, and Blue lines (+ leg towards console, - leg towards display) The capacitors are usually already inside any Nintendo SCART cable you buy, but it's always wise to double check. The capacitors are there to remove the 1V DC offset in the RGB signal - although many TVs and monitors will still display the RGB picture fine without them, they are strongly recommended to help prevent any damage occurring to less tolerant displays.

In the third picture above is where the four wires are attached to the bottom of the SNES2 AV port. In this picture the white wire (for composite sync) obscures where the red wire is attached for pin 1 but all four wires are attached. A clear insulating compound was used to help protect the connections and exposed wire. Make sure to add the resistors to these pins if they are not present in your RGB cable. Using glue to protect the wires is completely optional, and is not recommended if you want as clean of an install as possible.

Note that the SNES2 chroma encoder chip, which is labelled the same on the board (U4) is NOT the same chip as the original SNES. This one's RGB inputs from the now integrated PPU2 chip are on different pins.

There are more pictures and data on the old page.

This is a picture taken with a XRGB-3 using this mod. Composite sync and 100 ohm resistors on the RGB lines were used, as well as an original Super Famicom RGB cable: 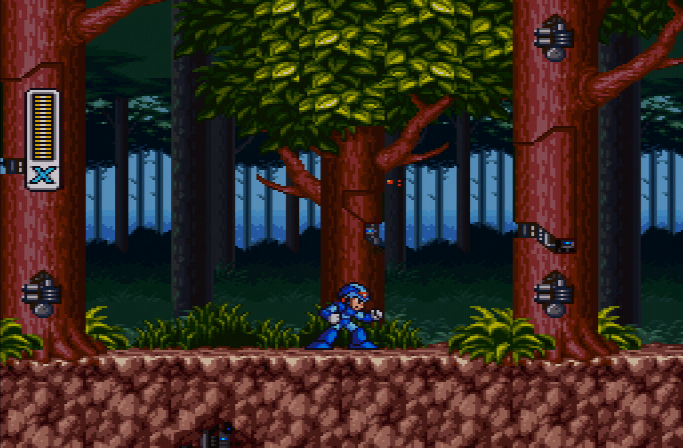 The Procedure for S-video

Special thanks to Kevin Horton for ceaseless assistance, and RARusk for all of the images on this page and additional information.