The purpose of this page is to show where one can tap into the RGB video and sync signals off of some PlayStation 2 motherboards. By obtaining the signals straight from the motherboard you can get around the following issues:

This page is solely intended for use in allowing one to play games and watch movies in the best possible picture from the PlayStation 2. The author of this page does not endorse or condone movie piracy although in order to achieve the goal of pristine RGB output one must get around the copy protection schemes.

The PlayStation 2 is a very complicated piece of machinery and one should not open it up unless one has a great deal of confidence in one's technical skills (just ask any modchipper or repair person). Personally, I have fragged one board and nearly destroyed another in finding these signals and learning all I can from them. The contacts are very small and can be a real pain in the ass to work with. Great care must be taken when working on a PlayStation 2.

I have made this page as accurate as possible considering the limited resources I have (four motherboards including a Slim PS2). With that said I cannot be held responsible for damage incurred by the user if one attempts to poke around a PS2 motherboard looking for various signals. Don't be afraid to ask around before undertaking such an endeavor or talk to a modder/repair person to see if they can help you out.

The following pictures are from a SCPH-30001 unit (Version 4) motherboard and a SCPH-70012 (Version unknown) motherboard. The Composite Sync circuit comes from Viletim!.

Being that this is a Wiki page you are more than welcome to add any information that will improve the quality of information provided here.

The Graphics Synthesizer is also where the three Sync Signals originate:

Composite Sync is routed straight to the A3525BR chip and Horizontal and Vertical Syncs are split and head to both the A3525BR and SC44728 chips.

The A3525BR chip then takes the RGB video and converts it into the other video modes (Component Video, S-Video, Composite Video) plus routes the RGB video to the A/V plug depending on the user's wishes. This chip will also insert sync on the green line when you use Progressive Scan RGB (480p, 525p, 720p (Linux kit)).

The RGB signals cannot be tapped from underneath the Graphics Synthesizer chip on a SCPH-300xx style PlayStation 2. However, there are three spots where RGB signals can be acquired on the motherboard: 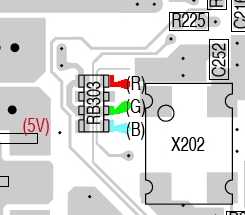 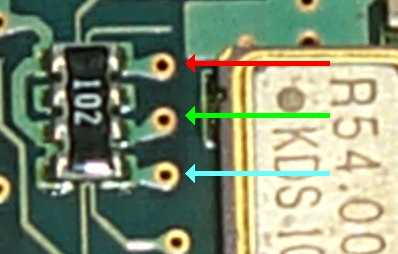 This first spot (on the bottom side of the motherboard - back side of PS2 pointing away from user) is an interesting one. Even though it explicitly states RGB on the picture taken from the Service Manual (top picture with points highlighted), I just get a black screen when I try to tap into it (using a NEC MultiSync 3D monitor). At this time I don't know what I need to do in order to use this spot to acquire RGB Analog video signals. 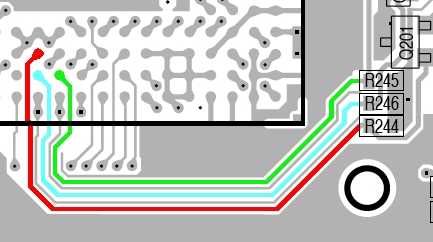 This second spot is not far from the first spot (top side of motherboard - front end of PS2 pointing away from user). In the top picture (from the Service Manual - with traces and points highlighted) you can see three surface mount resistors (R244, R245, R246). You need to attach wires to one side of them (in this orientation - the left side) to get a signal.

(You will also see where the RGB signals originate from the GS chip. Notice there are no vias for the any of the signals and this is why you can't acquire them directly from the chip itself)

The bottom picture shows what the resistors look like. You can see part of the GPU in the lower right corner. The wires must be soldered on the left side of these surface mount units as shown. You will also notice the the order here is RBG instead of RGB.

The only downside here is that the RGB signals need to amplified to be fully usable although these signals are not as weak as the Nintendo 64's RGB signal. 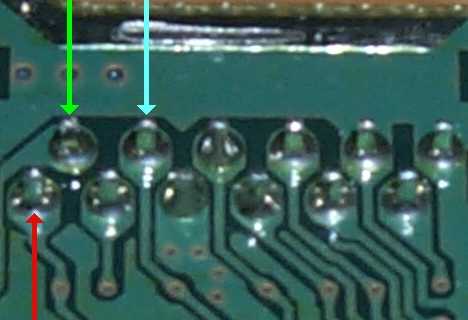 The last spot, on the Audio/Video Plug (top side of motherboard - back end of PS2 pointing away from user), is probably the best place to get the RGB signals because they are nice and bright here. However, by acquiring the video signals at this point, you are going to be prone to interference from the MacroVision copy protection signal (DVD playback), Component Video Forceback (DVD playback), and Sync-On-Green (Progressive Scan).

There are ways, explained a little later, that can suppress all interference when using the RGB signals from the A/V Plug. 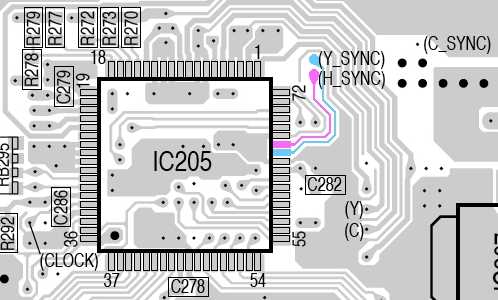 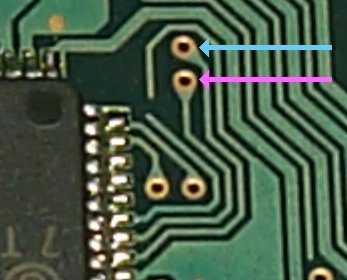 The best place to acquire the Horizontal and Vertical Sync signals are near the SC44728 chip as they make their way to it.

The top picture, from the Service Manual (with traces highlighted), clearly show where to get them:

Although you can see where to tap Composite Sync it is not recommended you get it from that point for reasons explained a little later. If you need it you can make your own Composite Sync signal with two very simple components. First, run the Horizontal Sync through a 1N4148 diode (very common - can be found at Radio Shack). Second, run the Vertical Sync through a 820 Ohm resistor. Once the two signals have been conditioned this way then you can simply splice them together.

In addition, the sync signals may need to be buffered (using a 74hc244) depending on the monitor being used.

Based on my research into the MacroVision copy protection signal there appears to be two main parts to the signal. 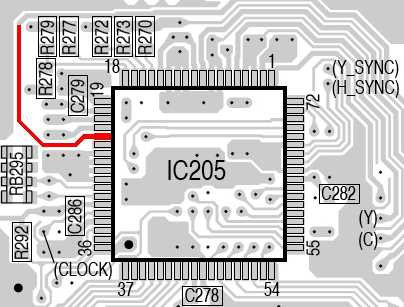 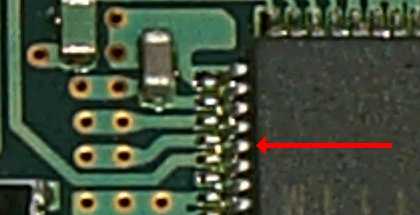 The first part is the colorstripes which are rapidly modulated colorburst signals intended to mess up recording devices in conjunction with the main pulses. I believe that this is controlled by Pin 23 on the SC44728 chip and is highlighted on both pictures. This signal goes to the A3525BR chip and enters it at two points (Pin 5 and Pin 13). This trace can be easily cut to prevent any problems when acquiring RGB signals from the Audio/Video plug. This modification is unnecessary if you acquire the RGB signals from any other point. 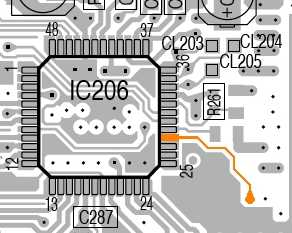 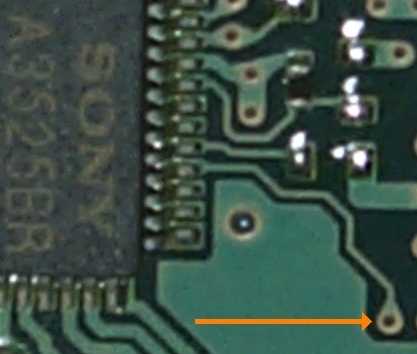 To prevent Component Video Forceback during DVD playback Pin 28 of the A3525BR video chip needs to be connected to Ground. This pin is highlighted (orange) in both pictures. 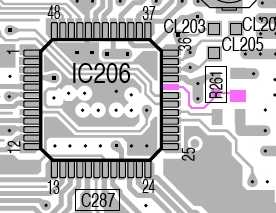 To prevent Sync-On-Green when using Progressive Scan Pin 32 of the A3525BR video chip needs to be connected to ground. This pin is highlighted (pink) in both pictures. It should be noted that this only affects RGB usage and not Component Video (where the sync would be on the Y/Green line).

In this model Sony did some major re-visioning. They removed the IEEE port, quieted down the fan and DVD drive, and added Progressive Scan DVD playback.

However, thanks to the SCPH-30000 Service Manual, I found that there are vias underneath the Graphics Synthesizer chip where the RGB signals could be tapped (unlike the previous style motherboard which had no vias for RGB under the chip). But when I tried to tap the vias I got just a black screen not unlike when I tried Location 1 on the Version 4 motherboard.

This makes it unclear whether or not the analog signals have been turned off. I hope that they are still on and that I need to find a way to make them show up. In addition, if I can find where Pins 272, 273, and 274 are at on the GS chip then I can find the sync.

The reason that this unit is so small is the fact that Sony combined the two main chips (Emotion Engine and Graphics Synthesizer) into one chip called the “EE+GS”. Plus they decided to completely ditch the hard drive bay altogether and shrink the unit further. 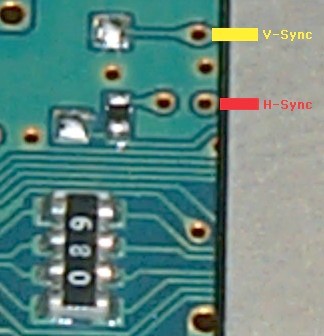 The sync signals can be found very close to the EE+GS chip as shown in the above picture. One of the resistor packs is included as a landmark to help locate the signals.

It is also unclear at this time if the EE+GS chip has any RGB Analog video pins that can be tapped into underneath the chip.

Hopefully in the near future I can find hacks for the CXM chips that will allow users of the newer PS2 models to be able to fully use RGB Analog with no interference.

It is also unknown at this time if anybody has been able to extract the DVD drivers from the SCPH-70000 units so they can be used on the SCPH-30000 units to give them Progressive Scan DVD playback capability.

I also hope that somebody uploads the Service Manuals for the SCPH-50000 and SCPH-70000 units to help complete my PlayStation 2 research.