The full spec of the Wii connector is not yet known, but so far we have the composite (AV), component, RGB and S-video pinouts, thanks to forum members RGB32E, dustinh2k and Scorpius. The image below was made by RGB32E, modified by NFG to reflect numbering by dustinh2k. An excellent step-by-step tutorial for making your own component cables was created by tkamen.

* Luma/Chroma are the Y/C pins on S-video connectors.

Scorpius revealed the RGB pinout for the PAL Wii. This has been confirmed by user Tak with the official RGB cable. 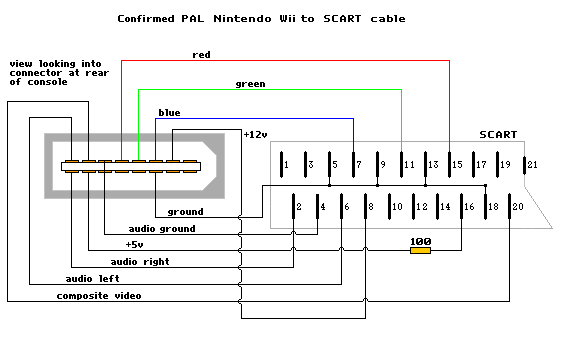 In this diagram (and, it should be noted, the official Nintendo RGB lead), SCART pin 8 (aspect ratio switching) is permanently connected to 12V. This will tell TVs that listen to this signal that the aspect ratio of the picture is 4:3 (as any signal between 9.5V and 12V will). If you have a suitable TV and want it to work at 16:9 by default, this pin needs to be brought down to between 4.5V and 7V (6V nominal). A voltage divider should probably be used for this purpose, but a single resistor will also probably work with a bit of information about the probable internal resistance to ground of SCART pin 8. This has been listed as >10Kohms, but how stable the actual value might be between different TVs is very difficult to say. Alternatively, of course, you could just use the 5V signal from pin 4 of the Wii connector.

Information suggests (see section above) that Wii pin 16 actually contains information about the aspect ratio currently being provided, but the voltages present are not compatible (in magnitude or orientation) with those required for SCART switching to operate. NB: Since I wrote this, I have discovered that other experimenters are reporting that this pin does NOT alter its voltage in units of several regions - the conjecture is that it will ONLY operate as expected in Japanese units where the D-terminal cable is used.