There aren't many games that support the six button controller for the X68000. In fact, there's not even ten of them. If you want to play some games to their fullest, however, you'll need more than the normal two buttons. This page will show you how to do exactly that.

The pinout for a few of the above buttons may be in error. The original diagram was ambiguous, if it doesn't work it should be pretty clear which ones are wrong. Change this wiki page to reflect the error if you find any.

The button labels above correspond to the Capcom Fighting Stick, which is (in essence) a SNES controller. To make a little more sense, here's a SNES/StreetFighter button map:

Step 1: Open up your 6 button Genesis/MD controller and expose the printed circuit board

Step 2: Locate the small white molex connector that connects the controller cable to the board 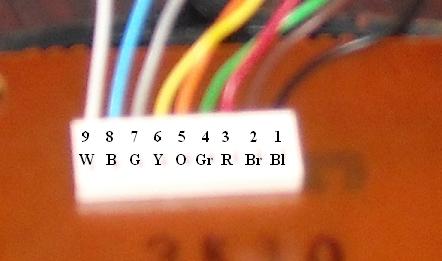 Step 4: Re-connect the wires in the following way: NOTE: The copper wire inside the genesis controllers is of very poor quality and breaks easily, so is it advisable to wrap each solder joint liberally with electrical tape immediately after making the join or the wire is apt to snap.

Step 5: Make sure that all your solder joints are insulated, then close the controller up.

Now, your pad will function with any game as if you are using the MD-to-X68000 adapter that came with Street Fighter or Atomic Runner Chelnov, as well as any FM Towns games requiring similar adapters. So, the mod negates your need for the adapter.

Making a Genesis to X68000 adapter

Actually it's been reported that the previous diagram is wrong, Caius pointed to the following diagram instead. 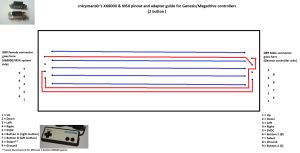