Screen Control mechanism,made by LSI developed originally by SHARP , is the most characteristic part of X68000. In this chapter, it is explained about several screen modes,screen control mechanisms.

X68000 has a very strong screen control mechanism that isn't seen in other personal computers. Almost screen view required in business-use computers are characters, and very easy graph view, so their hardwares have screens for characters (including kanji) and graphics in about 16 colors. On the other hand, X68000 is designed for dealing with several requirement about “views”,such as real time action games,high definition with tens of thousands colors for example ray tracings, window system with several character fonts, without overload of CPU. 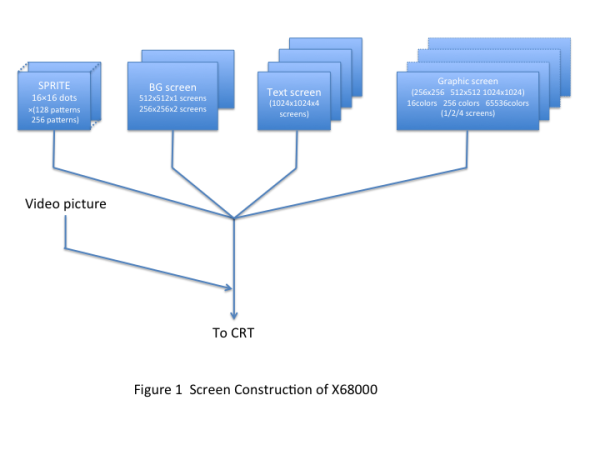 These screens have respective characters and make it possible to be variegated expression by using properly for purposes or using combined. Here it is collected each of construction and characters, about every graphic,text,BG,and sprite view easily. Figure 2(p.163) shows constructions of each screen,graphic,text BG, and sprite screen. 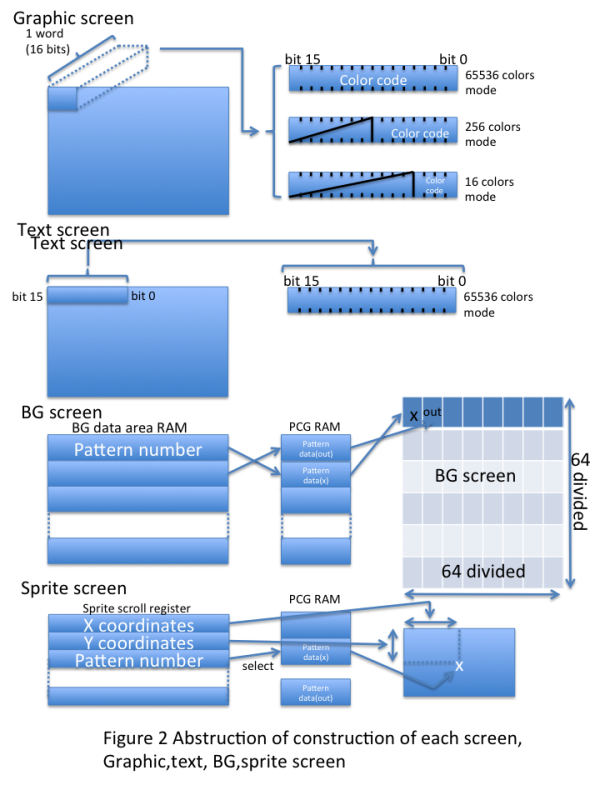 Graphic screen is suitable for the occasion such as paint soft or ray tracing soft that uses many colors.65536 colors at the same time is shown in this screen. Else 65536 colors mode,it has 256 colors mode,16 colors mode.In all mode, 1 dot on screen always shown by 1 word(16 bits). When we draw figures ,bit arrays of data are easy understood when they are virtical to screen, so it is also called “vertical type”. We can define a color of the dot by writing color code in memory address correspond to ordered dot position, and we can take the color code by reading the memory of the ordered dot position. When we use more colors,drawing time is not increase,and it is easy to calculate data on screen.So it is profitable for drawing graphics,but it is not suitable for use of showing many dots at the same time such as showing character because it can't write 1 dot at 1 word access.

Text screen has the just opposite character of graphics screen. By The name “Text screen” we think it can only shows characters, but text screen of X68000 is a kind of graphics screens.It is useful that we can put dots on free position or erase them. The Difference of the text screen and graphic screen is that ,in text screen ,bit arrays are in horizontal direction.That is 1 word data correspond to horizontal 16 dots. In graphic screen we must write 16 times to draw 16 dots even in monochrome mode,but in text screen we can write 1 time.So it is useful to show previously prepared patterns such as character patterns . X68000 has 4 such text planes, and each plane corresponds to each bit of color code. Then max 16 colors selected from 65536 colors it can show.

BG(Back Ground)screen is a screen mainly made for game alike Sprite screen. In game screen,it is usual not only moving characters but showing backgrounds such as cities or maps. We can use text or graphic screens for such purpose,but in case of game, BG screen is made for more efficient screen control paying attention to using many alike patterns. BG screen consists of 64×64 squares ,and 32×32 regions shown on display. Each square has corresponding memory area and when we write pattern number (0-255),registered pattern is shown. We can show each pattern individually in wanted area, but BG can show at the same time 32×32=1024 pattern(but we can use 192 pattern). X68000 has 2 BG screen and we can select where we want to show by 1 unit dot about each 2 screen individually.So we can scroll smoothly backgrounds.

Sprite shows defined patterns on free position of the screen. X68000 can define 256 patterns (16dot x 16dot)and show max 128s. (but 32s on a horizontal line).Graphic screen or Text screen point to relative motion-less screen ,and sprite screen is comfortable for the purpose such as action games which moves quickly patterned characters. If we try to such games on graphic screen or text screen,we must read the pattern data which a character moves to, and then we draw back the data after moving a character other position. By using sprite,such overlap is processed by hardware,so software only have to write designation resister of sprite position,then CPU load is very decreased. “GRADIUS” attached to Original X68000 is good example of fully practical used of this Sprite function.

2. Construction of each screens and Address allocation

Display circuit of X68000 is very complicated which is operating simultaneously each having different type such as graphics, text, BG, and sprite screen and dealing with superimposing ,screen capture, and so on. So it may be difficult to understand when listing all resistors,then at first I will explain constructions of each screen that X68000 has ,and address allocation of visual memory. In next section, functions of screen on/off,priority control.

And it is called high definition mode or normal definition mode in Table 1. That means simply horizontal scan frequency is 31kHz or 15kHz. It it strange 15kHz is called normal mode because X68000 usually uses 31kHz. But this term is often used in manuals by SHARP,so I follow a rule.

15kHz is used in analog TV(in Japan,but analog TV broadcast in Japan is discontinued),then if superimpose mode is used, we use 15kHz mode. In 15kHz we can use only screen mode whose dot number is 512 or 256.