It's an unfortunate truth that not all hardware provides power on the video output. Game consoles usually do, and those without an internal RF modulator certainly do. The X-RGB2, as one example, does not. You can't hook it up to most TVs and many monitors, via the Japanese rgb-21 or SCART connector, because the display relies on power being present to enable RGB mode. If you don't provide this signal, usually 5v or less, the monitor will often refuse to enable any display.

This mod is a solution to the problem, and while the specifics may apply only to the X-RGB2 the theory is valid for any device that doesn't offer any power.

I used a short length of cable with two DB15 connectors on it, one male and the other female, to create the shortest extension cable I've ever seen. On the output end I added a short little tail with a clip-on connector, connected inside to pins 7 and 8 (power and ground, respectively). The rest of the pins are straight through, RGB, H+V Sync and L+R Audio. There was only one ground wire left over, so I connected every ground in each connector to every other ground, and then the wire connects the two grounds on each end of the cable. Connecting every ground is a good habit to get into, you never know when you'll end up with hardware that detects ground on a random pin to determine if it's plugged in to anything.

You'll need a power supply of course. The PSP and Nintendo DS use a 5V supply that's perfect for providing a little bit of juice for the signal, but you could use anything: a USB port has +5V on it (and should be safe, don't blame me if your PC explodes). 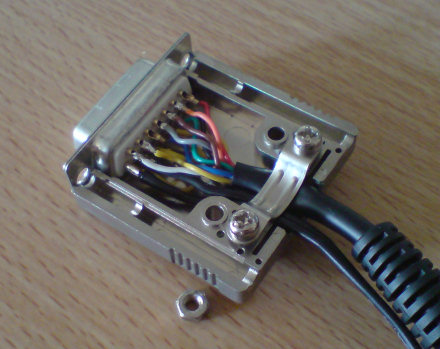 The 2-pin connector used here is a JST (Japan Solderless Terminal) EL-seriesconnector. I bought a handful of them in Japan, they weren't marked. Anything will do, I used these because they were small and handy.